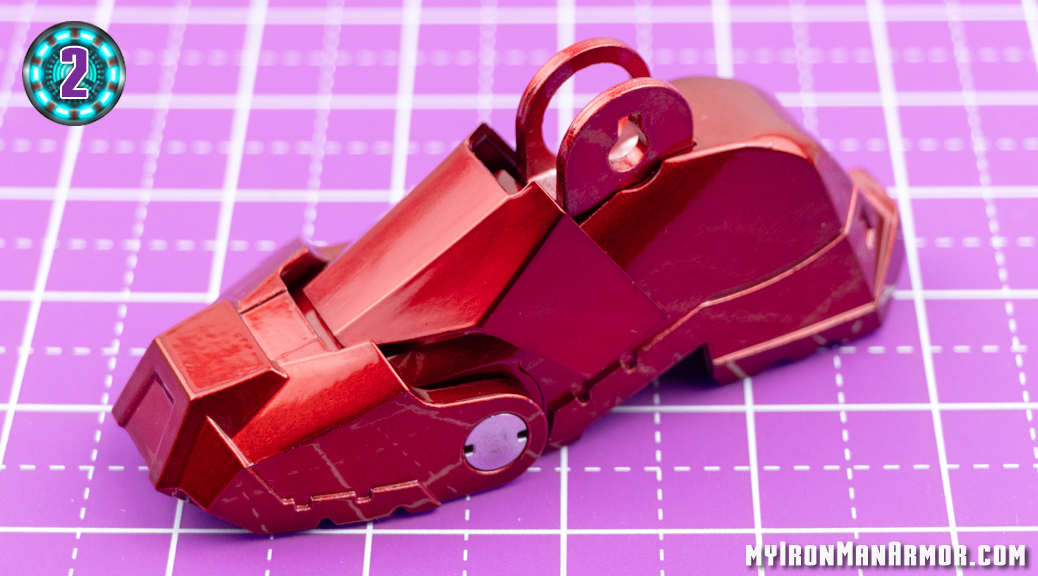 “This issue’s parts make up another piece of Iron Man’s Mark III armor, the left foot, which is jointed at the toe. The foot features an LED, battery case and switch.”

NOTE: Three CR1025 batteries are included with this issue. These will be used in this issue as well as the next two issues. 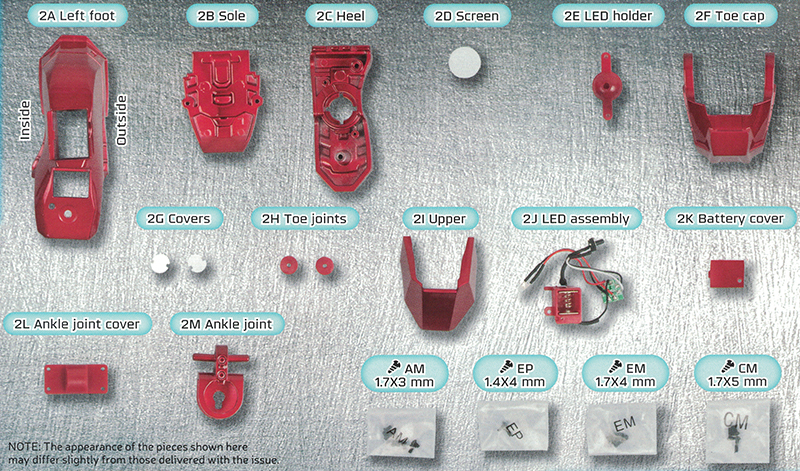 Materials: The Left Foot, Sole, Heel, Toe Cap, and Ankle Joint are all metal. The rest of the parts are plastic. 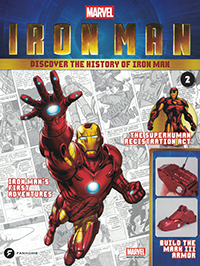 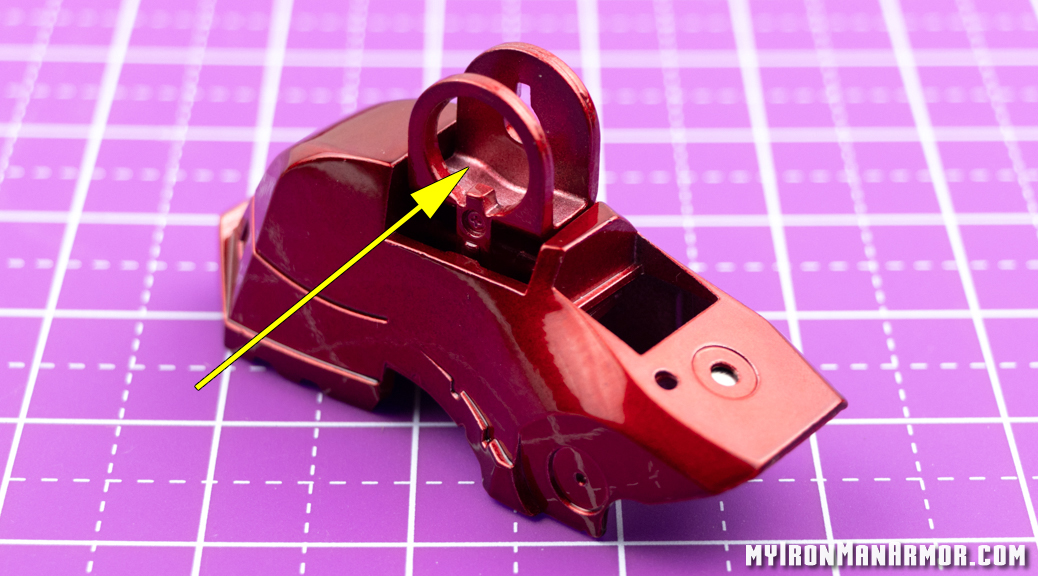 This part will support the leg and allow the ankle to rotate. This is also your friendly reminder to try using 3-in-One Oil on all screws going into metal: 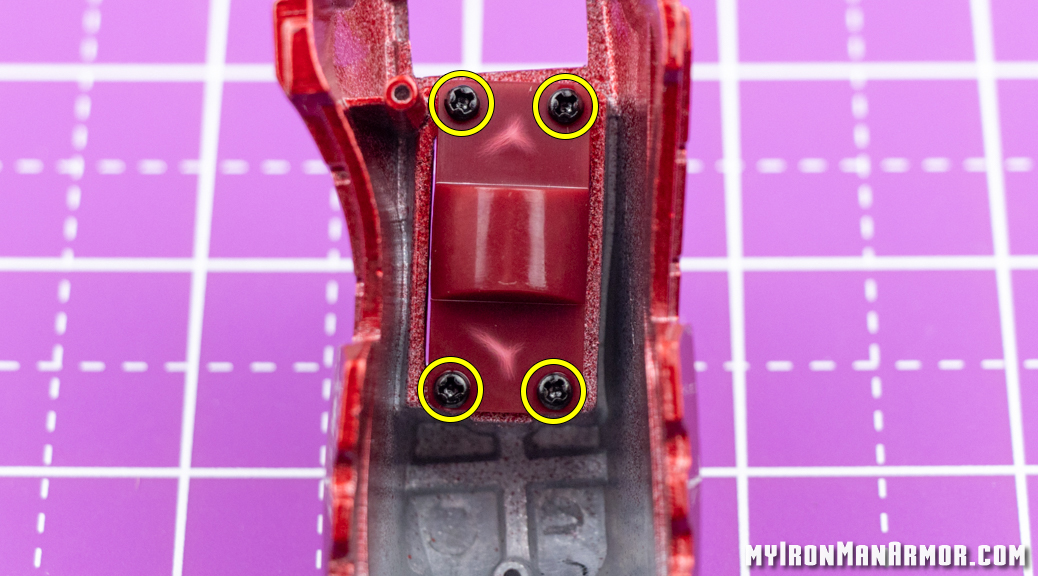 Fit the switch of the LED Assembly into this square compartment of the Left Foot, as shown: 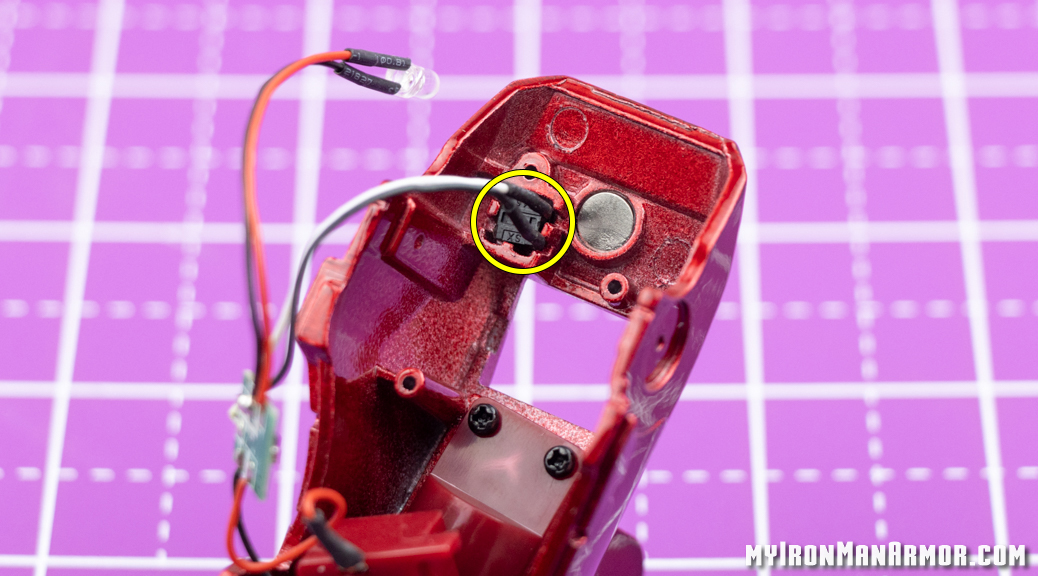 Fit the battery box of the LED Assembly to this location of the Left Foot as shown, and secure it down with one (1) AM screw.

There is a small tab on this LED Assembly (arrow below) that keeps the switch from falling out. On my model, the switch was still loose after installing the battery box, so I put a small drop of super glue along the forward edge to fix it in place. Just don’t get any glue on the ‘post’ of the switch so it still operates correctly: 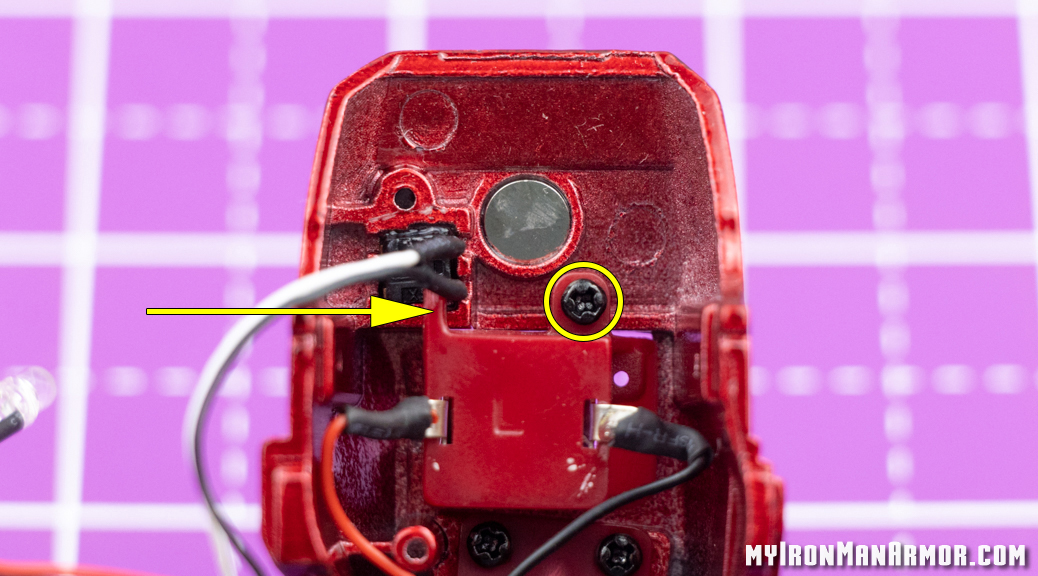 Place the Screen into this round opening on the inside of the Heel: 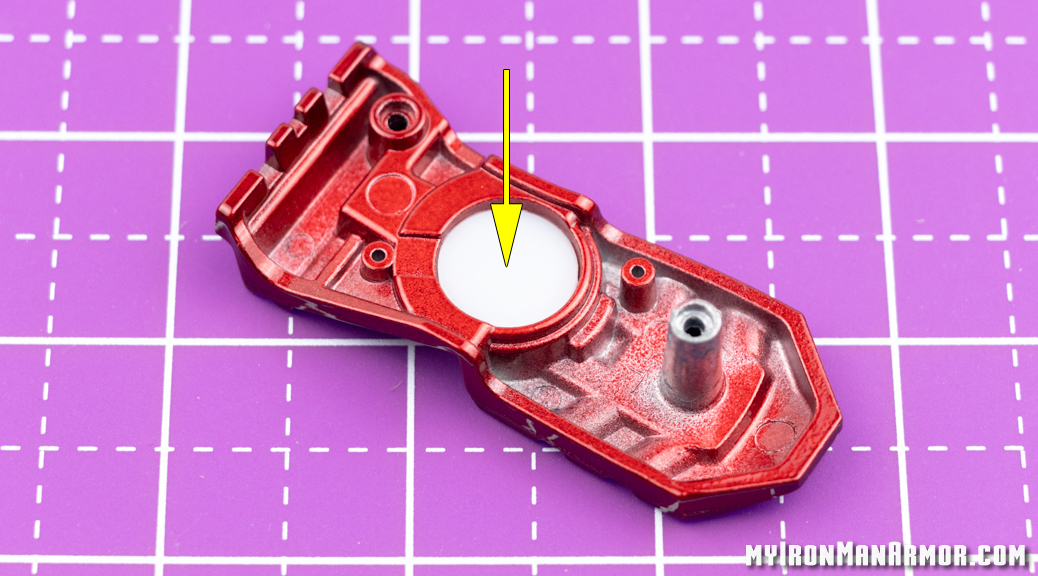 Cover the Screen with the LED Holder as shown, and secure it in place with two (2) AM screws: 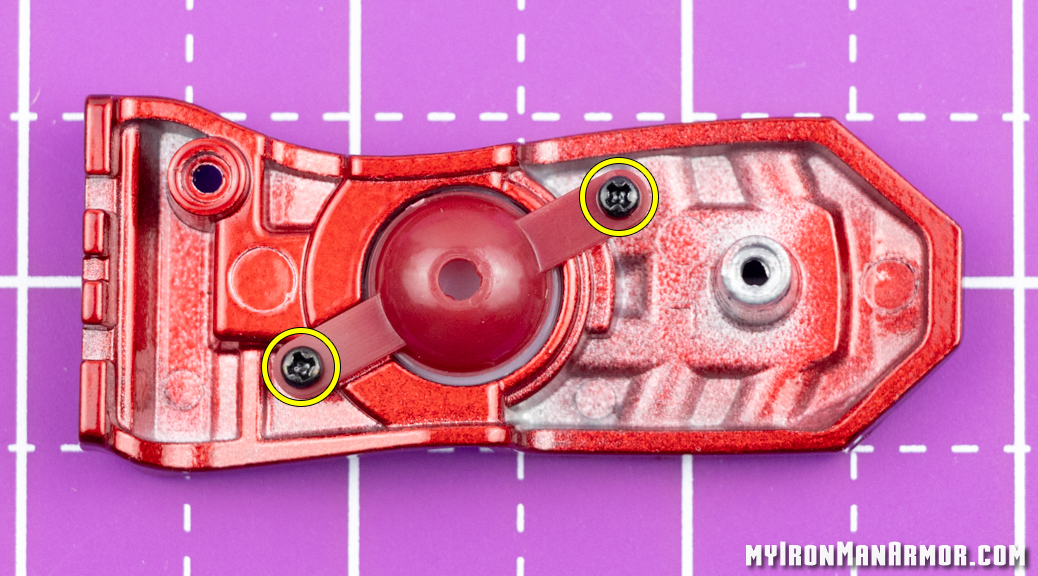 Bring the Left Foot assembly over and push the LED of the LED Assembly into the hole of the LED Holder: 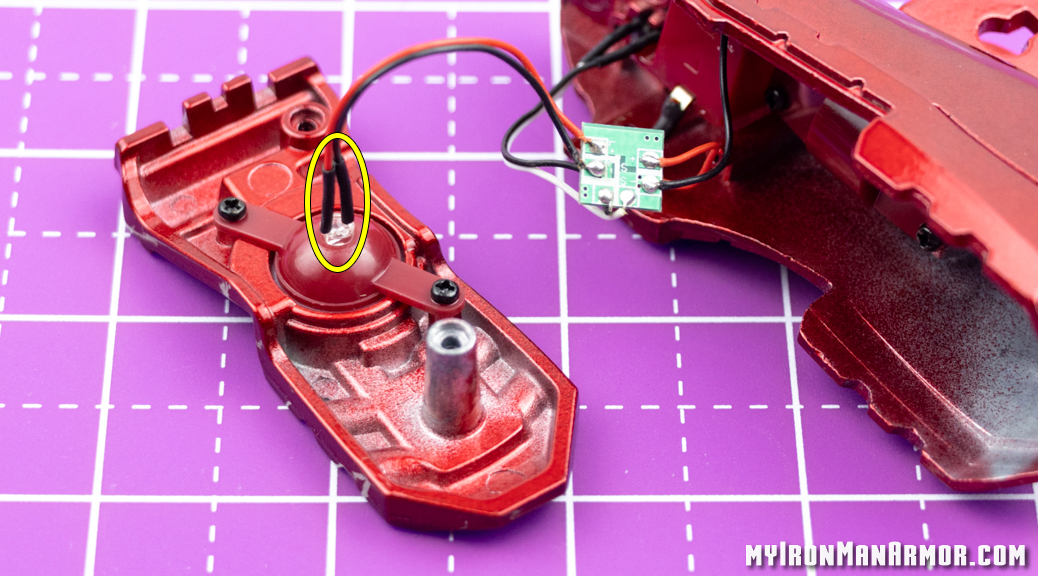 Press the Heel assembly firmly into the bottom of the Left Foot.

When test fitting this step, I noticed that all of the wiring and the small circuit board of the LED Assembly need to fit inside the Left Foot. To make them fit better, I gently bent the pins of the LED forward, like this: 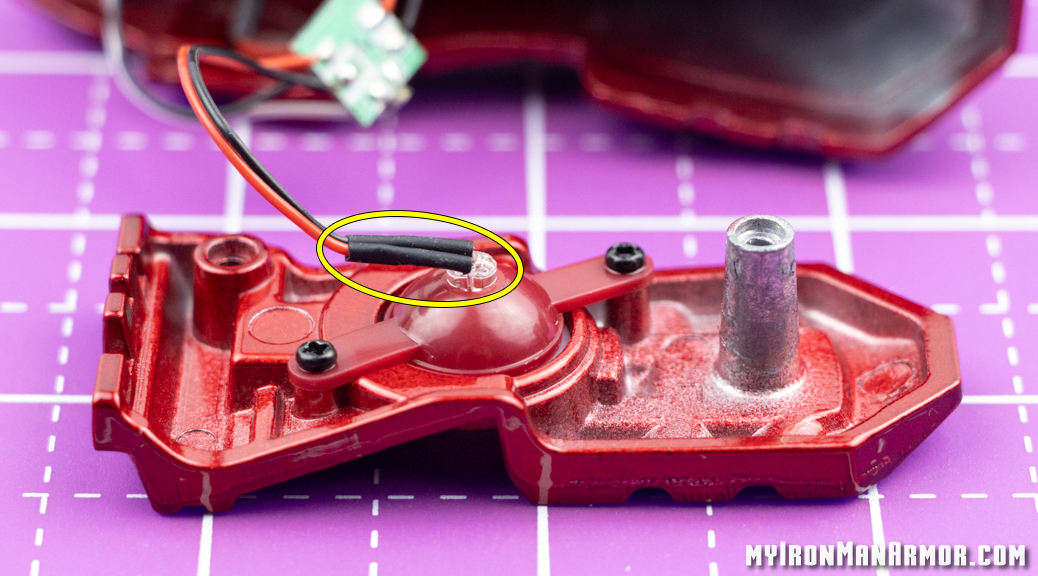 Also, to isolate the electrical bits from shorting on any of the metal parts, I wrapped the circuit board in a piece of electrical tape: 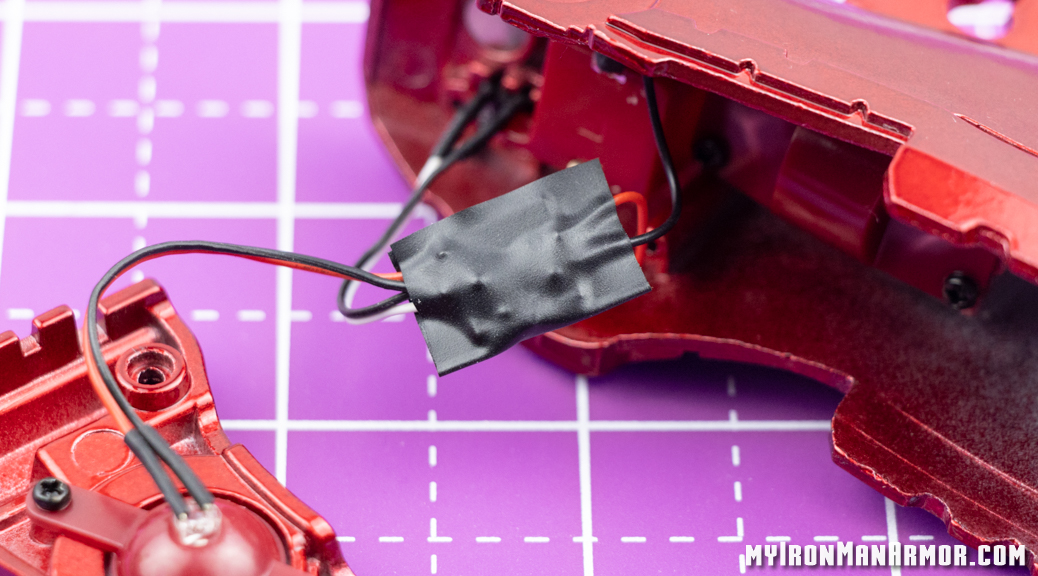 Then, I carefully fit the two parts together: 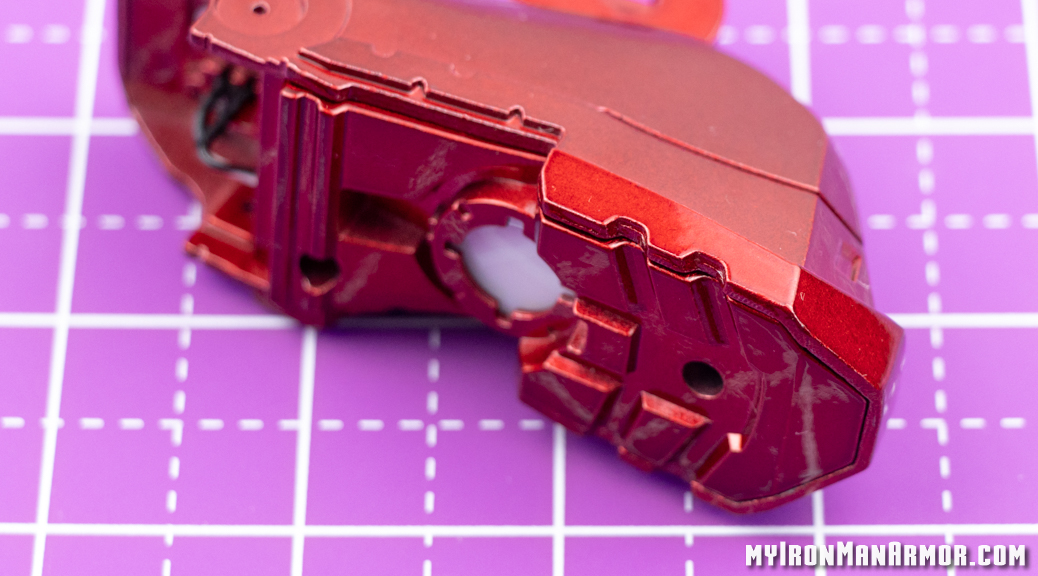 There are notches in the front of the Heel, so I routed my switch wiring through one of them so it would sit flush and not pinch any wires: 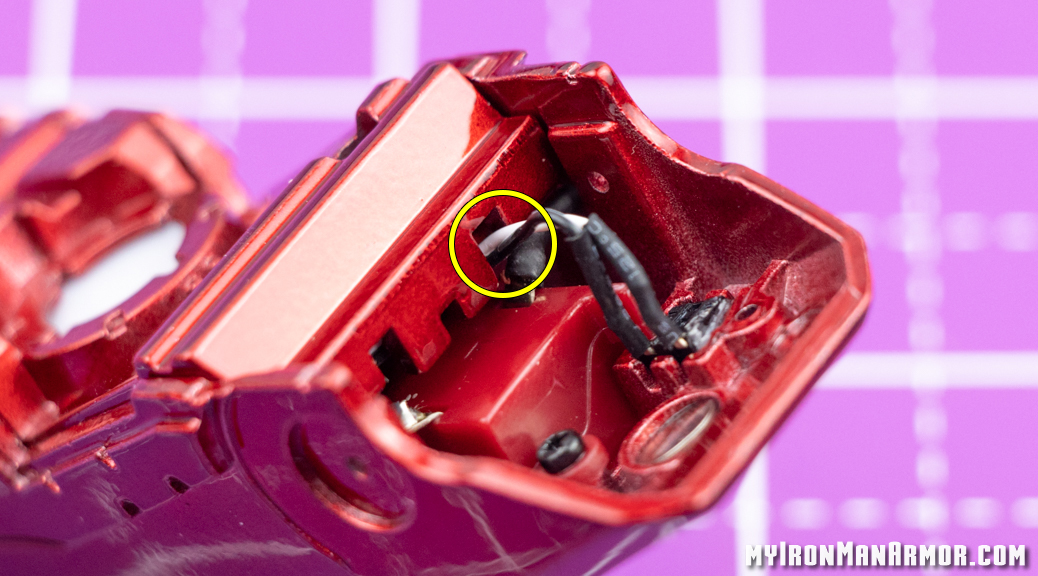 I noticed that the Heel also came very close to touching the positive lead of the battery box, so I put a piece of electrical tape there as well to isolate it and prevent any electrical shorts: 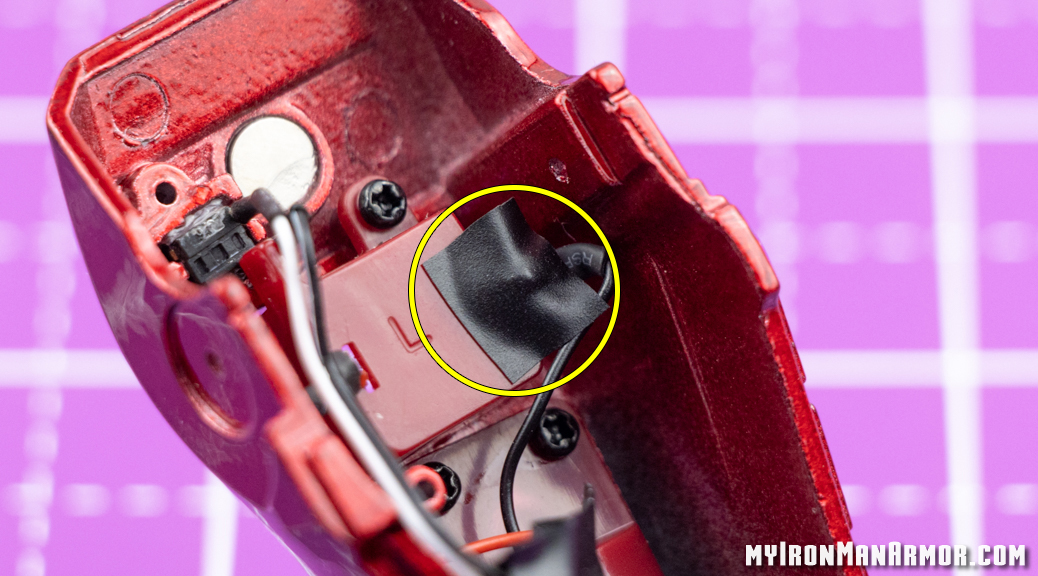 Secure the Heel to the Left Foot using two (2) AM screws: 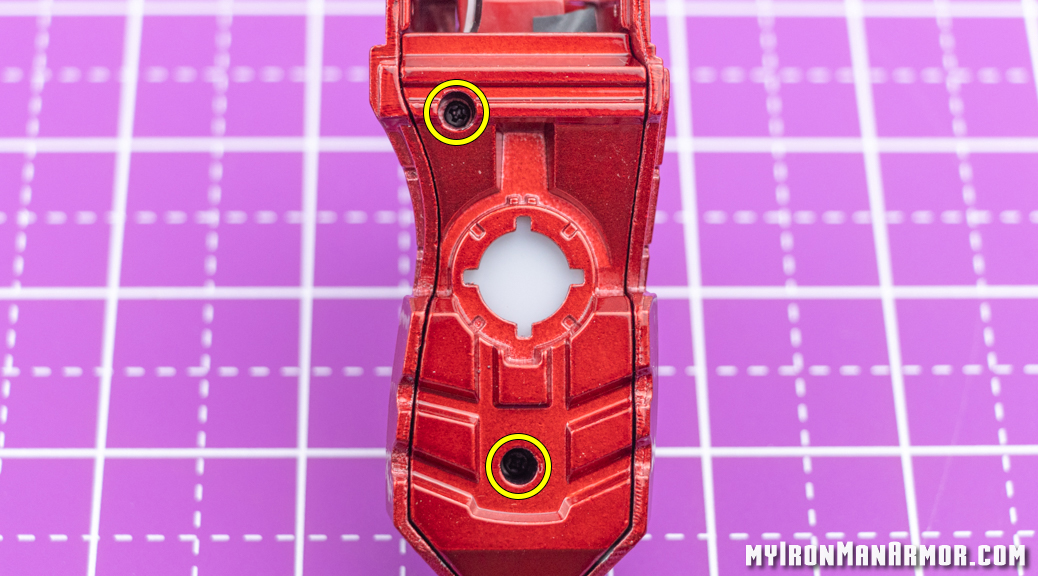 Fit the two red Toe Joints into these circular openings on both sides of the Left Foot and hold them in place. 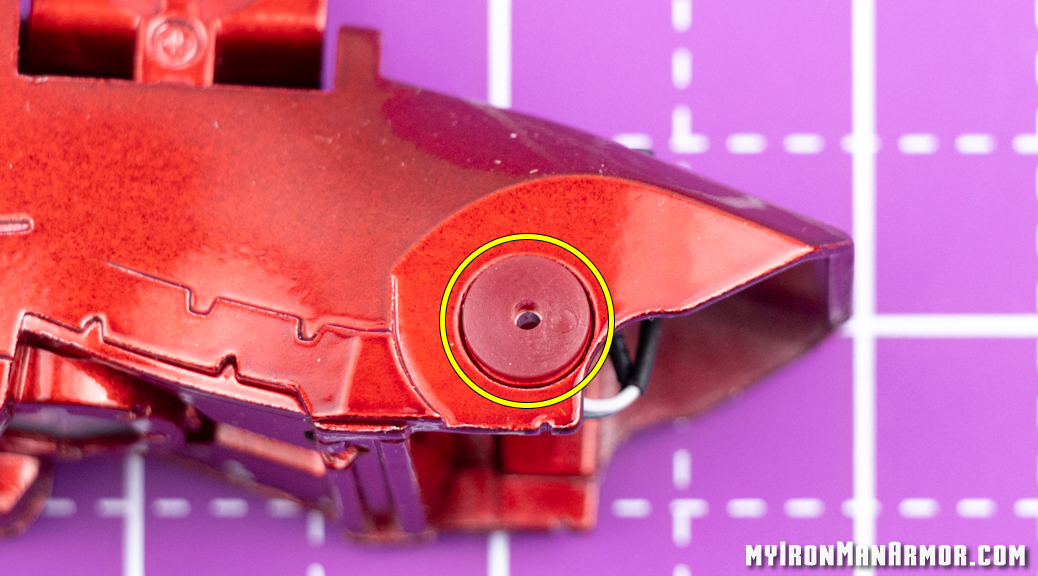 While holding the Toe Joints in place, slide the Toe Cap over them, as shown.

This is a tight fit, so you may need to slightly squeeze the side of the Left Foot as you slide the Toe Cap over the Toe Joints: 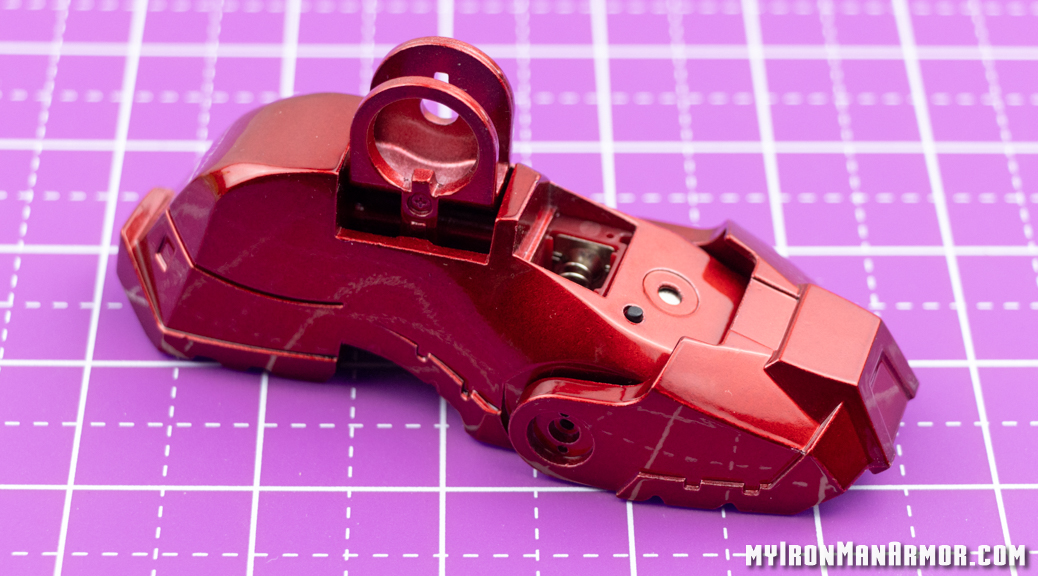 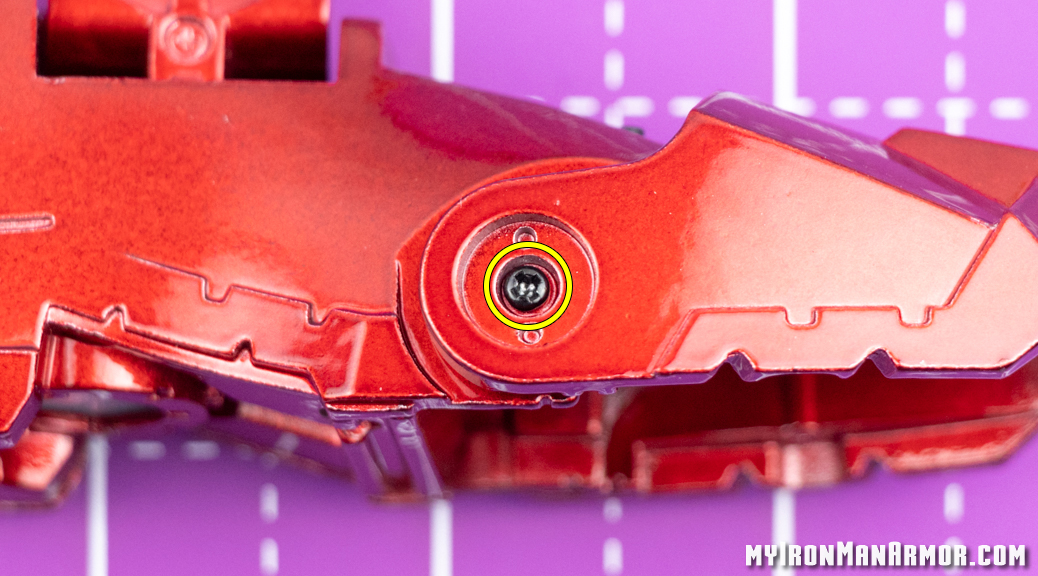 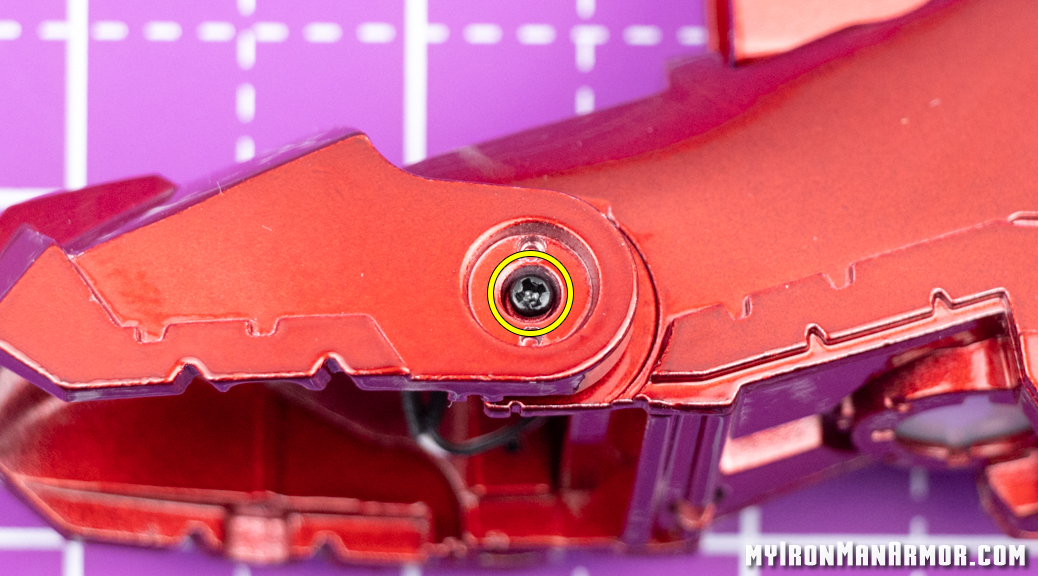 Fit the pins of the Covers into the matching holes around the screws we just installed. These will attach with magnets: 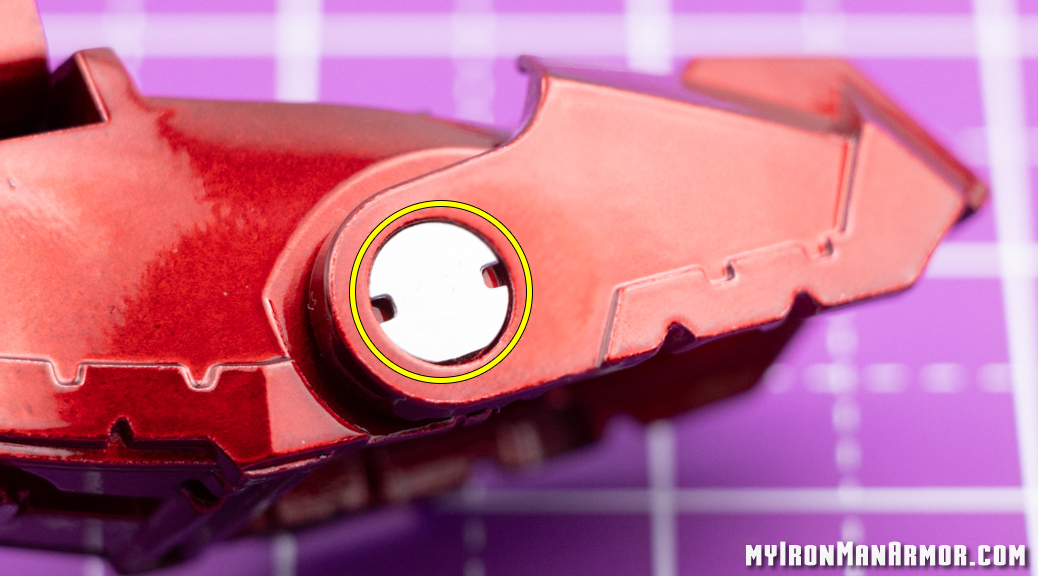 Fit the Sole to the bottom of the Toe Cap, and secure into place with two (2) AM screws, as shown: 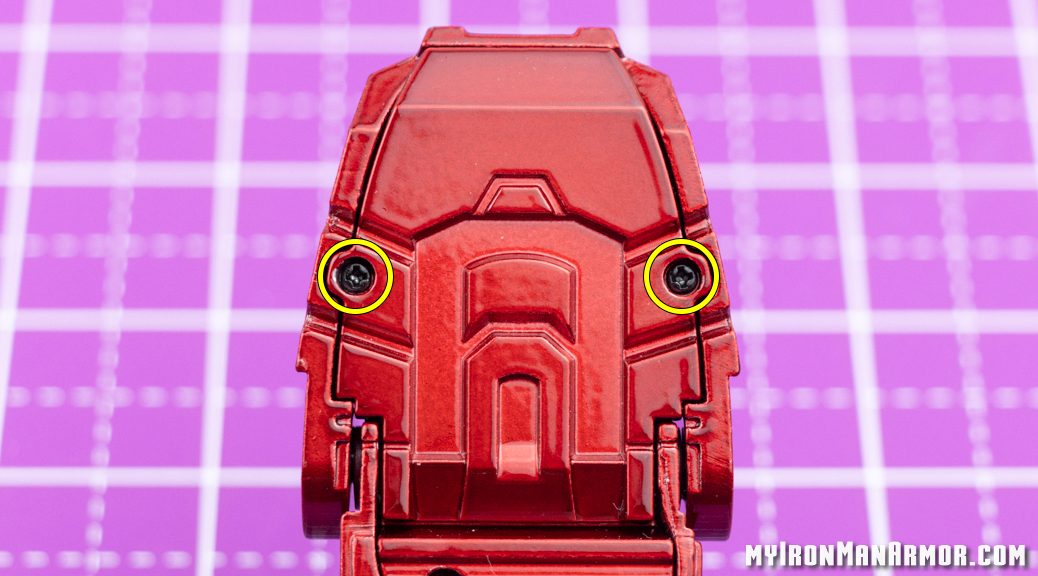 The Toe Cap should be able to pivot up and down.

If your Toe Cap does not pivot, or takes a lot of effort, you may need to loosen the screws under the Covers slightly: 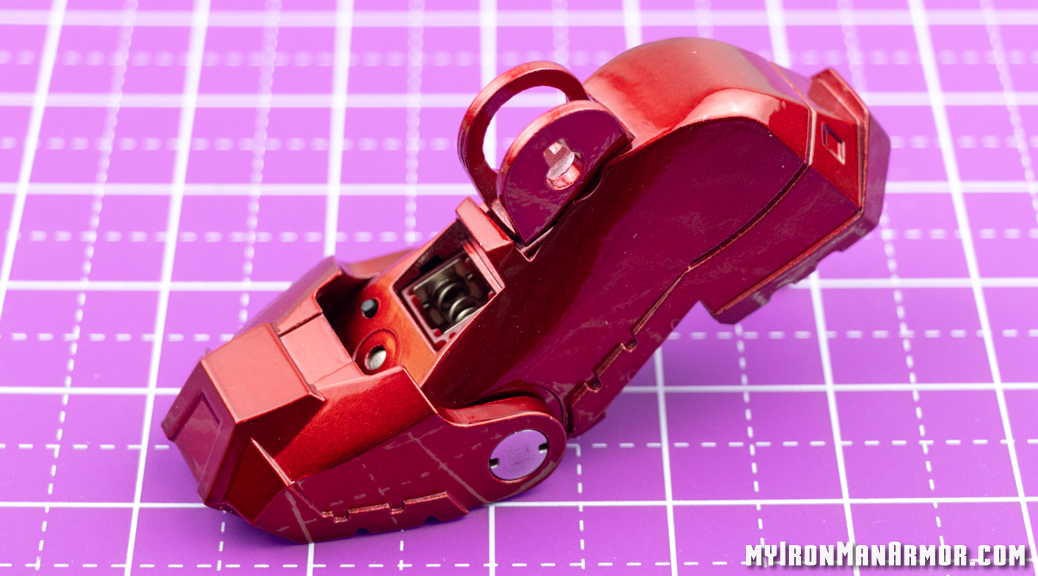 Insert one CR1025 battery into the socket of the LED Assembly, with the negative side of the battery towards the outside of the Left Foot.

We can optionally use a pair of tweezers here to compress the spring and make installing this battery easier: 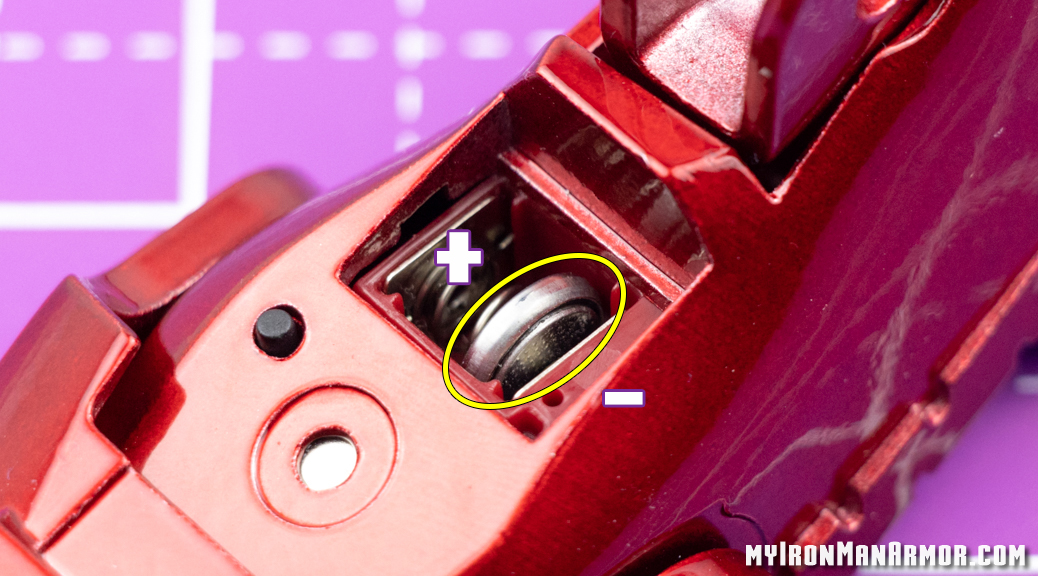 Fit the Battery Cover into place over the opening and secure it closed with one (1) EP screw: 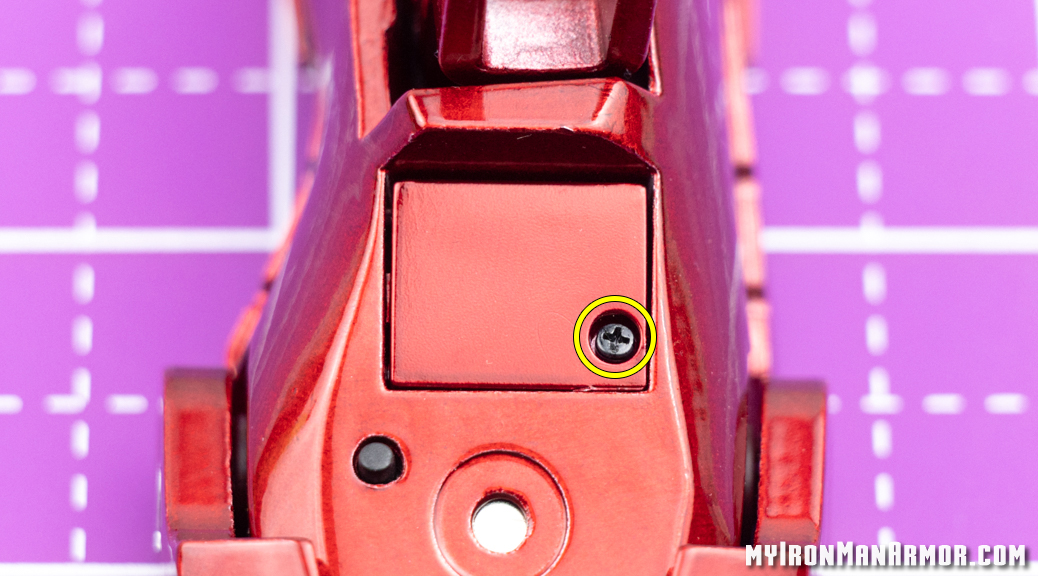 Place the Upper into place on top of the Left Foot. It will hold itself in place with magnets: 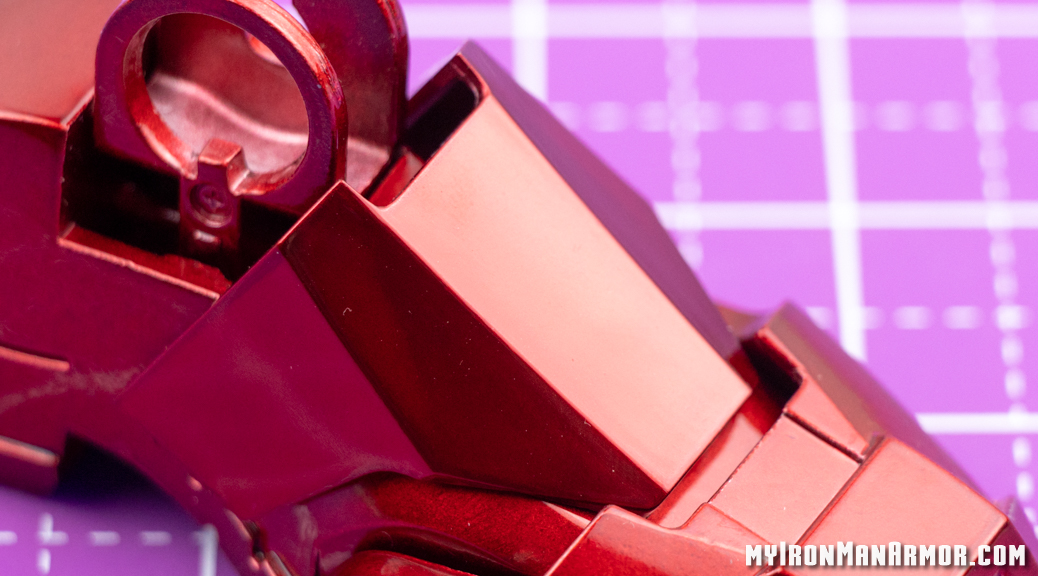 That competes this issue! We can lift off the Upper and press on the exposed switch of the LED Assembly to turn the repulsor light on and off: 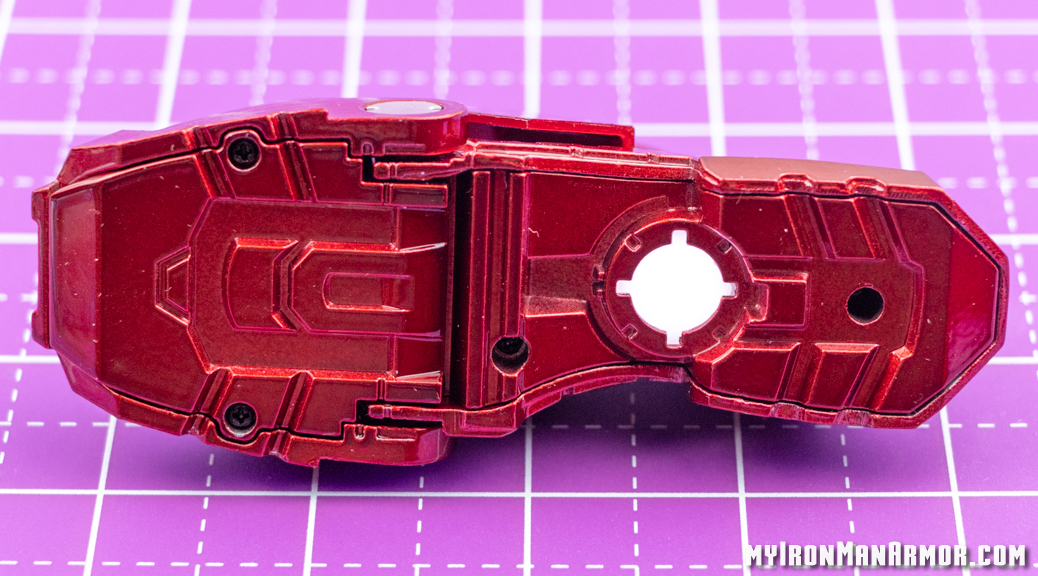 From head to toe – we have now built the Iron Man helmet and a boot! I’m curious on how all of the lights will be connected, if at all, in later issues. Keep these parts safe for now until we need them in future issues. Do not discard the unused CR1025 batteries, we will need them.